12 Reasons You Should Lift Weights 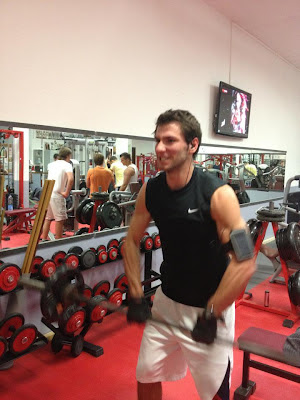 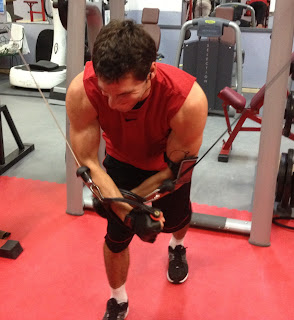 Our son Andrew working out in the Sainte Maxime gym while in Paris our eldest son Lewis is on the insanity programme! I think I need to get down to the gym....................quick!!

If you think cardio is the key to blasting belly fat, keep reading: When Penn State researchers put dieters into three groups—no exercise, aerobic exercise only, or aerobic exercise and weight training—they all lost around 21 pounds, but the lifters shed six more pounds of fat than those who didn't pump iron. Why? The lifters' loss was almost pure fat; the others lost fat and muscle.
Other research on dieters who don't lift shows that, on average, 75 percent of their weight loss is from fat, while 25 percent is from muscle. Muscle loss may drop your scale weight, but it doesn't improve your reflection in the mirror and it makes you more likely to gain back the flab you lost. However, if you weight train as you diet, you'll protect your hard-earned muscle and burn more fat.

2. Your clothes will fit better.

Research shows that between the ages of 30 and 50, you'll likely lose 10 percent of your body's total muscle. Worse yet, it's likely to be replaced by fat over time, says a study. And that increases your waist size, because one pound of fat takes up 18 percent more space than one pound of muscle.

Lifting increases the number of calories you burn while your butt is parked on the couch. That's because after each strength workout, your muscles need energy to repair their fibers. In fact, researchers found that when people did a total-body workout with just three big-muscle moves, their metabolisms were raised for 39 hours afterward. They also burned a greater percentage of calories from fat compared with those who didn't lift.
Lifting gives you a better burn during exercise too: Doing a circuit of eight moves (which takes about eight minutes) can expend 159 to 231 calories. That's about what you'd burn if you ran at a 10-mile-per-hour pace for the same duration.

4. Your diet will improve.

Exercise helps your brain stick to a diet plan. University of Pittsburgh researchers studied 169 overweight adults and found that those who didn't follow a three-hours-a-week training regimen ate more than their allotted 1,500 calories a day. The reverse was also true— sneaking snacks sabotaged their workouts. The study authors say both diet and exercise likely remind you to stay on track, aiding your weight-loss goals.

Break a sweat in the weight room and you'll stay cool under pressure. Scientists determined that the fittest people exhibited lower levels of stress hormones than those who were the least fit. Another study found that after a stressful situation, the blood pressure levels of people with the most muscle returned to normal faster than the levels of those with the least muscle.

Yoga isn't the only Zen-inducing kind of exercise. Researchers found that people who performed three weight workouts a week for six months significantly improved their scores on measures of anger and overall mood.

As you age, bone mass goes to pot, which increases your likelihood of one day suffering a debilitating fracture. The good news: A study found that 16 weeks of resistance training increased hip bone density and elevated blood levels of osteocalcin—a marker of bone growth—by 19 percent.

8. You'll get into shape faster.

The term cardio shouldn't describe only aerobic exercise: A study found that circuit training with weights raises your heart rate 15 beats per minute higher than if you ran at 60 to 70 percent of your max heart rate. This approach strengthens muscles and provides cardiovascular benefits similar to those of aerobic exercise— so you save time without sacrificing results.

9. Your heart will be healthier.

Researchers at the University of Michigan found that people who did three total-body weight workouts a week for two months decreased their diastolic blood pressure (the bottom number) by an average of eight points. That's enough to reduce the risk of a stroke by 40 percent and the chance of a heart attack by 15 percent.

Lifting could result in a raise (or at least a pat on the back from your boss). Researchers found that workers were 15 percent more productive on days they exercised compared with days they didn't. So on days you work out, you can (theoretically) finish in eight hours what would normally take nine hours and 12 minutes. Or you'd still work for nine hours but get more done, leaving you feeling less stressed and happier with your job—another perk reported on days workers exercised.

University of South Carolina researchers determined that total-body strength is linked to lower risks of death from cardiovascular disease and cancer. Similarly, other scientists found that being strong during middle age is associated with "exceptional survival," defined as living to the age of 85 without developing a major disease.

Email ThisBlogThis!Share to TwitterShare to FacebookShare to Pinterest
Labels: Fitness for golf

Great article. I think we payed $8 for a pound of beans, but I may need to shop a little.

I have not heard about before. Keep sharing more blog posts on this Community and get extra benefits with this ideas and knowledge. Thanks for this one.
linkibl
stage32
stage32mpe